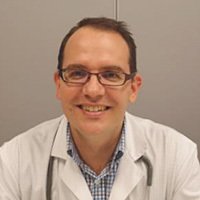 Simon van Hooland qualified as MD in 2001 at the Catholic University of Leuven. During his Internal Medicine studies, he gained 1 year of ICU experience in Australia, Darwin, NT (2003-2004).In 2005 he started his Nephrology training in UZ Brussel, where he graduated in 2007 as an Internist-Nephrologist. He was active in the Nephrology staff over there as a renal consultant until the end of 2008. Since 2009 he’s working as a nephrologist in AZ St Lucas, Ghent.

He is a general nephrologist with the following areas of interest:

He is currently a board member of the NBVN (the Dutch speaking Belgian Nephrology Association).

He lives in the Ghent area. In his spare time he likes sports, music and songwriting.

Scan the kidney and its vessels

A Systematic Approach of Abdominal Ultrasound !

A systematic approach of abdominal ultrasound !

Basics of ultrasound (B Mode and Doppler)

The 10th conference of the Vascular Acces Society